Share on facebook
Share on twitter
Share on linkedin
Share on email
Share on whatsapp
The transition from paper medical charts to electronic health records (EHRs) has streamlined many of the ways that health care is delivered in the Unites States and contributed to safety improvements in a number of areas. Clinicians now have their patients’ information at their fingertips, along with new data tolls that help guide their decision and should reduce medical errors. But the increased use of electronic health records has also given rise to new, unanticipated EHR safety challenges.

Of the seven usability categories, EHR challenges were reported in the following areas: Data Entry, Alerting, Interoperability, Visual Display, Availability of Information, System Automation & Defaults, and Workflow Support. The chart below represents the frequency with which each usability category occurred following an EHR usability study: 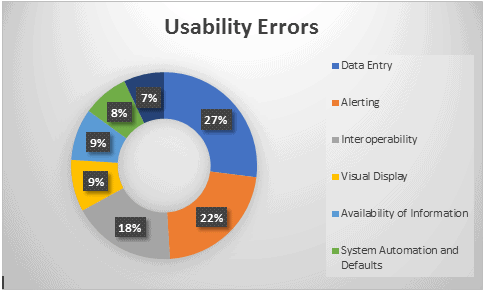 Health IT safety includes how EHRs have improved patient care and how their use may contribute to medical errors. A number of reported safety events blame the EHR vendor for possibly contributing to patient harm. A study published in the March 2018 issue of JAMA examined these patient safety concerns. Of 1.735 million reported safety events, 1956 of them explicitly mentioned an EHR vendor to blame and another 557 had language suggesting that the EHR usability contributed to possible patient harm.

Are the Numbers Accurate?

Lead researcher, Raj M. Ratwani, PhD, MA, believes the actual numbers are much higher. He believes the main takeaway from his research is for the healthcare industry to recognize that some electronic record keeping systems suffer from lack of usability and this poor usability is associated with patient harm. Related Articles From True North, Ratwani states that “electronic health usability is really the extent to which a clinician can safely, efficiently, effectively, and satisfactorily use an electronic health record or any technology for that matter.” The reason he believes these numbers are much higher is that the study only looked at reports where the EHR vendor was mentioned specifically by name. But in their day-to-day work, clinicians rarely include the names of vendors or products when they write of safety reports. Additionally, only reports with explicit mentions of the top 5 vendors were included. Furthermore, in general, medical and patient safety reports are known to be underreported, whether they involve an electronic health record or not.

The International Organization for Standardization’s ISO 9241 standard defines usability as “the extent to which a product can be used by specified users to achieve specified goals with effectiveness, efficiency, and satisfaction in a specified context of use.” Read More From True North,

Summary of the Problems with Electronic Health Records Systems

What we can garner from this report is that data integrity errors, erroneous workflows, and usability issues continue to plague EHR safety. Problems can arise from health care professionals entering information incorrectly because the design of a system may not fit their workflow well or the layout may be confusing. In addition, records may not display information clearly – meaning clinicians may base decisions on incomplete data. Executive leaders, both vendor and healthcare facilitators, must continue to embrace a culture of safety to mitigate any patient wellbeing concerns.

How Healthcare IT Developers Can Detect Safety Concerns

Health care facilities and health IT developers can detect safety concerns throughout a product’s development; as it is being designed, when it is submitted for government clarification, during implementation in hospitals and other institutions, and through staff training and use. EHR safety challenges can arise from the base design of a product, during install, implementation or customizations, or during unique workflows within a facility. Doctors, nurses and other healthcare professionals are the front-line users of EHRs. Their daily use of these systems enables them to detect errors or potential problems. Their feedback and reporting to internal quality and safety leaders will contribute to fostering a culture throughout an organization.

Additionally, organizations like the American Medical Association is developing standards for EHR and will use this framework to work with physicians, vendors, policymakers, health care systems and researchers to drive EHR improvements that can advance the delivery of high-quality care.

Don’t Let EHR Issues Impact the Good Work Your Doctors are Doing, Request a Consultation and Let’s Put an End to your EHR Headaches