The Most Common EHR Challenges & Problems that Providers Face

As I sat down to begin writing this blog I thought I knew where my research would take me. I thought I’d be talking about the high costs of EHR applications, the time to train on a new system, how the note-taking takes away from patient engagement while in the room, how the number of EHR clicks has increased.

I was wrong. Way wrong.

Most Common Challenges & Problems about EHRs from Doctors

I realized this when I stumbled onto a collection of healthcare provider quotes form a 2015 AMA Town Hall Summit Meeting on EHR technology.

The physician quotes were not only eye-opening, they were heart-breaking. This collection of quotes from the aptly named, Break the Red Tape Town Hall, were much more than common complaints about an EHR. They were real world examples and problems so complex that after reading them, it seems like the best option is burning it down and starting over from the beginning.

I’ve included the link here. Before reading another word I write, please go read all the physician comments. Let me include the link again. PLEASE CLICK HERE.

Okay, thanks for coming back. What did you think? I would like to know your impressions, I will be doing a video blog about their comments and hopefully I can reach out to a few of them. Since over two years have passed since the summit, I want to ask, “How have things in your practice changed? How can I help? How can we, as IT providers, be better for you and for your patients?”

There Can Be No One-Size-Fits-All Solution.

That goes for IT providers, EHR programmers, and for the good people in government passing down meaningful use legislation. How are we requiring physicians to do something that doesn’t improve diagnosis or rationale for treatment, and calling it progress?

Record-keeping, note-taking, diagnosis, and course of treatment are tenants of medicine, but every branch of medicine needs to be examined individually to see where and how the EHR should be utilized.

The problem with EHR adoption is that Stage 2 and Stage 3 did not account for the variances in medicine. The AMA states that,

“The program takes a one-size-fits-all approach, which is not appropriate. Program requirements should be more flexible and better structured to accommodate various practice patterns and specialties.”

For example: some patients have quite a bit of information to be collected in a single visit, like the lupus patient mentioned in the summit article; some patients move frequently between the local hospital and their in-town specialists; pain management patients visit their doctors once or twice a month for injections or controlled substance prescription refills; chronic care patients have years of charts that need to be accessed.

These, and hundreds of other examples require special assessments yet the MU regulatory policies expect each one to adhere to the same set of rubrics. Even allowing each practice to initially choose their own private labeled EMR provider, but then still requiring them to hit all the meaningful use rulings does not mitigate the lack of application.

Instead what it does is force the EMR provider to build an EMR that is made to meet policy rather than meet the needs of the physician or patient.

How Did This Come To Happen?

Researchers continue to squabble over the rate of medically caused injuries and deaths, although one report suggests that the third leading cause of death in the United States is medical errors. It’s not this high although this was a major headline a few years ago, but when reading the Johns Hopkins study you must read the 50 different ways their argument could be dismantled here.

Regardless, medical errors like prescribing a drug that negatively interacts with another the patient takes should be eliminated (happens fairly frequently when the patient is unaware of the medications they take and no records are available).

As should amputating the incorrect leg (happens rarely). As should hospital-contracted pneumonia when the patient is in-house for a knee replacement (happens occasionally when an already immunocompromised patient ends up staying in-house longer than anticipated).

Stage One of Meaningful Use was simple and had a high conversion rate. This stage, most simply put, directed providers to capture patient demographics, vital signs, medications and interactions, allergies, implement Computerized Provider Order Entry (CPOE), and provide patient access to their own private information.

Stages Two and Three are intended to advance clinical processes and improve outcomes, respectively. Both stages have had rollout delays and abysmal adoption rates. Providers are penalized for their lack of adoption and until the system improves, many are choosing the penalty; thus returning to an improved level of patient care, over complete adoption.

To an already overworked physician who has seen their reimbursements cut by 30% over the past few years, poor delivery of care is not something they are willing to give any longer.

First, meaningful use was introduced and the first stage went well. Most healthcare professionals saw the official capturing of records, diagnoses and orders as a very good thing. Giving patients access to their records was the humane things to do. The healthcare industry, by in large was SOLD.

Then came the additional stages. These stages turned out not to be geared towards them or their practice anymore. In fact, they didn’t seem to be tailored towards any specific practice, so who were they benefitting? But the industry tried to make it work.

They tried everything they could to meet the criteria. They hired scribes to take their notes, or they asked their patients, “do you mind that I take notes on my computer while you are talking to me?” They scheduled less patients in a day and allotted more time for each patient; not that they were seeing each patient more frequently, per se. They needed that extra time to complete 200 additional clicks after the patient left the office. This time was used to place an order, schedule a follow up, or consult with the patient’s other specialists. Doctors quickly realized all this was costing them quite a bit of money. So maybe they found themselves rushing through patients or having their mid-levels assume more patient load. This resulted in less favorable reviews, which also decreased the doctor’s demand and Healthgrades reviews.

It must feel helpless to be a doctor right now.

I remember when New York State implemented Common Core. Common Core required teachers to teach the kids to pass a certain exam, in a certain way, each year, instead of what, and how, the state had been teaching for years. It turned out that many businesses who were in the ears of politicians stood to make millions off this change. It forced the teachers to teach a new and complicated way. Here is an example of Common core math: 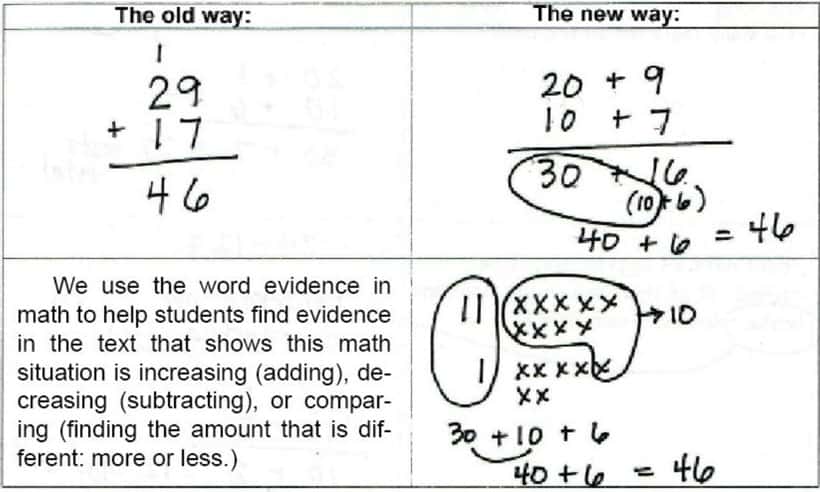 What NYS quickly witnessed was teachers abandoning the tenants of learning to gear their teachings purely towards this test. Kids weren’t learning or retaining anything, and this method worked only for a few like-minded individuals. However, the teachers and school systems were penalized if a certain percentage of kids didn’t pass the test.

In medicine, no physician wants to abandon the core reasons they choose the medical professions: to help and to heal. But now, they are being backed into a corner. Sadly, they are far too busy, stressed and tired to organize and fight back.

Where was the feedback from experienced medical providers in the implementation on Meaningful Use? And is it true that MU was made so UN-meaningful that it will force physicians to join large hospital systems or a single-payer system one day?

As IT providers, let listen, really listen to our healthcare clients. No more band-aids, no more on the fly fixes. If it doesn’t save time, money, and improve patient outcome, don’t do it. We are an active participant in helping solve this problem and we absolutely have the power to hear and to help.